She is the Rwanda’s First Lady and a Humanitarian. Jeannette Kagame returned to Rwanda after the 1994 genocide and was saddened by the aftermath of the tragedy. Kagame, who is a mother of four, soon began working with those widowed and orphaned due to the genocide. When her husband took office in 2000, she continued her philanthropic work through the creation of the Imbutu Foundation. The organization supports development in health and education. Kagame was also the founding member of the Organization of African First Ladies against HIV/AIDS. Her work has complimented her husband’s efforts to rebuild Rwanda.

In 2010, Mrs. Kagame received an Honorary Doctorate, Doctor of Laws Honoris Causa from Oklahoma Christian University for her significant contribution to the worldwide fight against HIV/AIDS and poverty. In the same year, she was appointed Special Representative on Child Nutrition by the World Food Program (WFP). In 2009, UNICEF presented the Children’s Champions Award to H.E President Paul Kagame and First Lady Jeannette Kagame in recognition of their efforts at improving the lives of children in Rwanda. In 2007, World Health Organization (WHO) appointed her the High Representative of the Africa AIDS Vaccine Program (AAVP), to ensure the active participation of African stakeholders in all areas of HIV and AIDS vaccine research and development.

Mrs. Kagame holds a degree in Business and Management Science, and has delivered keynote speeches at numerous national and international fora on various themes including leadership, economics, health, children’s welfare, and women’s empowerment.

This ever smiling and seemingly shy mother of three is the wife of Uhuru Muigai Kenyatta, 4th President of Kenya and the First Lady of Kenya. Margaret was very instrumental during her husband’s campaign, often seen by her husband’s side all through. She is liked by many for her simplicity in regards to her dressing, nature and manner. On the other hand, many people see her as a shy and timid. Since the inauguration of his husband, Margaret has been running a campaign to reduce child maternal mortality rates.

Mrs Kenyatta delivered her maiden speech during the 12th meeting of the organisation of first ladies in Addis Ababa, Ethiopia. The campaign has been dabbed Beyond Zero Campaign.[1] On October 24th 2014, she was named UN Person of the Year.

Mrs. Guebuza is committed to addressing the issues of illiteracy, HIV/AIDS, and orphaned and vulnerable children in Mozambique.

The protection of children is central to the First Lady’s work.  She launched the Campaign “Children – Our Future” which has become the cornerstone of her work. Because Malaria is still the main cause of deaths for children under age five, she leads “Children without Malaria”.

Maria da Luz Dai Guebuza is Patroness in Mozambique of the Global Campaign to Combat HIV/AIDS.  Related initiatives include “Together for Children, Together against AIDS” and the national program “Window of Hope”.

She has attended conferences related to her areas of concern across Africa. In collaboration with UNICEF, Mrs. Guebuza helped launch Unite for Children, Unite Against AIDS, a five year campaign whose main aim is to focus on children with and at risk of HIV/AIDS. The campaign is part of a global UN initiative.

Separately, Mrs. Guebuza supports the work of Maranatha Volunteers, a non-profit group which administers a four-level literacy program, and the SOS Children’s Village, an organization providing vital support to orphaned children in Mozambique.  She received an Honorary Doctorate for her humanitarian work by the United Graduate College and Seminary from the USA in 2010.

Since she became the First Lady of Mozambique, she has been mindful of the fact that 70% of the Mozambican people live in rural areas and decided to give priority to direct contact with communities, especially those in remote areas where she seeks to be a social mobilizer, stimulating citizens in order to reflect on their future and the Country’s.

She is the wife of Tanzanian President Jakaya Kikwete. She has served as the country’s First Lady since December 2005. She originally worked as a teacher for more than twenty years. In 2005, the government launched a national campaign for voluntary HIV/AIDS testing in Dar es Salaam. Kikwete and her husband were among the first in the country to be tested.

As of 2009, she was Vice President of the Eastern Region of the Organization of African First Ladies Against AIDS (OAFLA). In 2012, the First Lady Kikwete, former Botswana President Festus Mogae and ten other African figures partnered withUNESCO and UNAIDS to support the Eastern and Southern Africa Commitment on HIV Prevention and Sexual Health for Young People, which was launched in November 2011.

Kikwete also founded the Wanawake na Maendeleo, or Women in Development (WAMA), a nonprofit which promotes development among women and children.

While speaking at the African First Ladies’ Summit in Tanzania, First Lady Michelle Obama gave a special shout out to Salma Kikwete for her work educating young orphan girls at her school in Dar es Saalam.

Aside from her work with students at her self-named secondary school, Kikwete also supports efforts to combat HIV/AIDS, serving as Vice President of the Organization for African First Ladies Against AIDS. 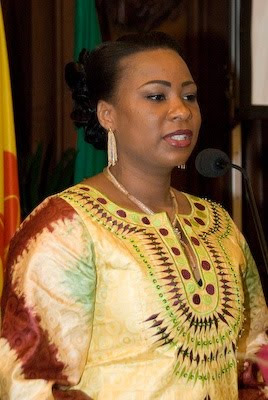 She is known to be a staunch Christian, who is using her belief in God to heal the nation that is still recovering from war. Her participation in a recent Christian event drew national attention and came as a surprise to many in her country.

“People of God, this is a very special day for me,” declared a confident Mrs. Kabila from the pulpit.

However, on the streets of the Democratic Republic of Congo, Marie Olive Kabila is a rock star of sorts. When she’s out in public, which is very rare, the crowds just can’t get enough of her. She rarely does media interviews or speaks publicly.

In the small church on the east side of the capital city of Kinshasa, hundreds of people gathered recently as Mrs. Kabila declared three days of nationwide prayer and fasting.

“I am here to tell you that I will never be ashamed of my Lord’s name,” said Kabila. “We need Him desperately to heal our country.”

For a Woman who has gone through so much in a patriarchal society, more so at the mercy of the first citizen, this is one strong willed lady as young as she is.

This is a story worth telling of Women who are utilizing their personal beliefs and to bring about a difference and change in a country where conventional means of solving challenges seem to be failing dismally.

We salute Mrs.Kabila and all the Women of Africa who are slowly and steadily making a difference, God bless you!

WIDE ARRAY OF FUNDING AND INVESTMENT OPTIONS ON OFFER FOR ENTREPRENEURS